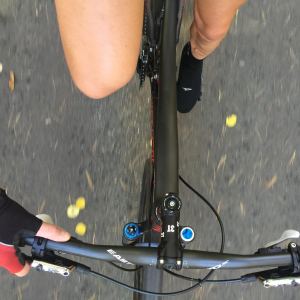 Sucker Brook Cross is a classic New England cross race.  Big fields, lots of great riders, lots of categories, and a distinct course.  Minus the 90 degree Garmin temp reading it is what makes this sport so cool.  The course starts with a small paved ramp to a section of 600 turns that vary from light to 180’s.  The surfaces are a mix of flat and off-camber and due to our weather everything was dry and loose.  There is a set of stair run ups and a set of barriers thrown in as well.  Following all that half lap of fun there is downhill fire road section into some wood single track stuff and a log step up.  The lap caps off with a sand pit that has some turns on the entrance and a 180 halfway through.  From there it is just a couple turns and a straight to the finish.  Start order is set by Crossresults.com rankings.  8 riders a row.  Crossresults has a formula that basically gives you points for the races you do based on field quality and size.  Lower the points the better.  There are likely ways to game it, but in the end, if you race enough you will have something close to your value.  Where you get hosed is if you don’t have many races or your best results are in small races without any heavy hitters, or if you only see heavy hitters and can’t place at all.  I started in the second row.

The race had several heavy hitters.  Adam Myerson, Alec Donahue, Dlyan Mcnicholas, Andy Scott, and a half dozen JAM Fund riders that can all drive their bikes better than I can in my dreams.  From the gun I mess up.  I get myself stuck on the wrong side of a wheel and can’t clip in.  I also can’t sprint.  So by the time we hit turn one I am at least 20 guys back.  Its all fast and turny for the next half lap and really no place a diesel like me can make up spots, actually the whole course doesn’t work to my skill set.  One might even say cross doesn’t work toward my skill set.  Thankfully, sorta, Adam Myerson gets pinned at the start and has to make up spots too.  He comes into the first 180 and just dive bombs like 10 guys.  After the race he said more or less “I felt bad doing it but I was mad from the start and I just see people as pylons”.  I thought it was great, I wish I had done it.  In fact, I did that earlier in the week at Catamount CX training series when starting at the back to practice passing.  When I did it, a dude didn’t give way and drove his bike into mine.  We both crashed, I sprained my thumb and he bitched me out. But Adam is Adam F’ing Myerson and wears the Stars and Stripes.  He has earned that.  Anyway, I want to use him as my blocker and go to jump on his wheel.  I am not the only one with the idea and I am now fighting for wheels 20 dudes back as the race is going up the road.  Awesome.

Over the course of the next 2 laps I work on staying as close to Adam as I can and we pick our way through the field.  Adam, of course, is doing a better job, but I am hanging in there.  I was trying to kill a funk of moving up a few spots then losing one in the sand pit or any of the dismounts.  By the start of the 3rd lap a group of 3 guys, Dylan, Andy, and Greg a super junior, had a small gap with Adam chasing and me finally at the front of the field ready to bridge up.  I was waiting out the turny section and as soon as it opened up I was going to bridge.  Before that was an off-camber turn that was tricky and I just biffed it.  On the ground, sprawled out and tangled in my bike.  5 guys blow past me.  The race is gone in front of me.  That’s why cross is great.  I had a hunch that would be a hard corner in the race.  I didn’t nail it down before the start.  Racing is hard anyway so even if I did when you are on the rivet mistakes are easy.  The guys in front of me, they nailed it.

I remount and work to get back on.  I catch, but now I am over hot, tired, pissed, and in a group that just saw me crash and wants nothing to do with my wheel.  By the end of the lap, 3 in and 3 to go, we are 8 strong having caught Adam.  I punch through the group on the pavement and start to chase.  Ahead Andy is several features ahead.  Dylan has come off and Super Junior Greg has a mechanical.  Might be heat, but I think Andy was just crushing it.  I take the lead hoping to reverse the gap but now I am getting tired, and hot, did I say hot, it was 90.  I am not smooth cornering anymore* but at least everyone else behind me has to deal with it.  We hit the sand and I suck it up.  Also the log step up I dismount.  JAM guys are hoping and killing the remount into single track.  So for every bit I make up I lose somewhere else.  Thankfully I am still able to shrink the group and by the last lap it is me and Trent Blackburn with Alec just off.  Trent has been killing me anywhere it is hard, especially the sand and the little chicane after it.  Going to the last lap I am actually gaped off a few seconds from that section.  I spend the next half lap bridging gaps I open to him but staying on his wheel overall.  Going into the second half I take the lead.  The plan is to come out of the sand in front.  If I do that the following chicane won’t mater and I can hope I have a jump left.

I never really figured the sand out.  I tried riding to the first turn but got bogged down.  Tried dismounting halfway in but had a crap dismount.  Tried to remount early to ride out, got bogged down.  Not once clean.  For last lap I was going to hit the sand from a sprint and just jump off and run.  It sorta worked but I was an inch from falling on my face.  But the only thing faster than running is trying not to trip.  Coming out of the 180 I feel Trent going for the pass.  I sprint as best I can, running, and we remount side by side.  We have a 120 turn out of it and I knew I had to beat him to it.  We are shoulder to shoulder, bumping and driving, but he gets over the top of me and setup early for the chicane.  I am off center and not good at that feature anyway.  He gaps me.  On the pavement before the last turn I jump up to him.  We hit the turn and my sprint is gone.  I roll in for 3rd.  He was clearly the better rider and it really showed on the last lap.  Kudos to him.  Andy probably forgot anyone started in the race behind him. 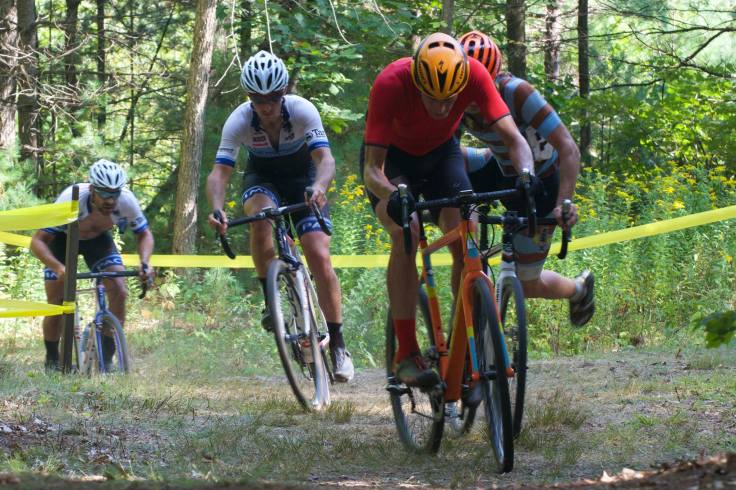 Overall I learned a ton.  First time actually getting to fight for a place in a New England race.  I can’t wait for the rest of the season.

Another incredible day with the @jamfund!❤ I couldn't be happier wth today's result with the scorching 🔥🌡 temps and a last row start, not to mention a pretty stacked field. Next stop: @kmccrossfest

All photos from Andy Cooper – Thanks!