I live in a town so small it doesn’t really exist anymore.  A bunch of years ago the town lost its Post Office and we basically got absorbed into the neighboring town.  So when I came down to New York City to race the Grand Fondo New York with my brother Derek I was out of my element.

We had a hotel near the Start/Finish of the race but registration was 135 blocks downtown.  The day before the race I checked into the hotel and did my warm-up ride to registration.  Highlights of the fact that I am not from the city include being the only cyclist that stops at a bike path red light and getting my bike stuck in a revolving door at the Penn Hotel.

Staging the next day didn’t go much smoother for us.  Derek and I were a bit slow to get out the door and we hit the on ramp of the George Washington Bridge at about 6am.  We were greeted by a sea of green.  If you don’t know, a requirement of the event is that you have to wear the GFNY jersey.  They use it as a way to easily identify who is in the event and based on the scale and the location, I am not sure how you could do it otherwise.

We walked up the on ramp 10-15 people wide as far ahead and behind as you could see.  By the time we got through security on the bridge, they shut down the lower level of the GWB for the race start, it was 10 minutes to the start and the competitive racer/VIP corral was closed off.  Best Derek and I could do was about 3000th of 5000 riders.  From the time the gun sounded till the time we made it to the start line we were 2:26 back.  Derek looked at me and said “We will never see the front”.

The night before Derek asked me if I wanted to just ride with him or try and do well.  He strongly suggested if I couldn’t do really well, I should just ride with him.  So when I stared down the GWB bridge and saw literally thousands of cyclists in front of me and though of the 2.5 minute head start the front of the pack had, I pretty much assumed my race was done and I had leisurely day of riding ahead. 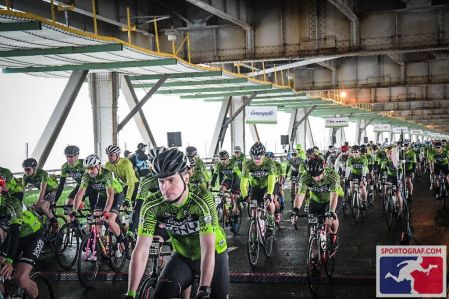 Derek and I at the start, on the left side of photo

The front pack not going slow

Thankfully, Derek was just enough annoyed at missing the start that he was willing for us to try and weave our way to the front.  And so we started our Death Star bombing run in a trench of green riders.  What gave us some hope was that I spotted the most worldly cyclist in the pro peloton, Dan Craven, with some Israeli Cycling Academy guy in tow.  He was about 100 guys up the road.  That gave me hope that if I could get on the Dan train I might see the front again.

I upped my efforts and hit all the climbs hard and tried not to crash dive bombing any gap in the wall of cyclists I could find.  I lost Derek, but I also didn’t get on the Dan train.  He was crushing and I was still getting stuck sprinting and braking behind cyclists with unknown lines of progression.  We hit the first KOM and I rode it on the limit, after being almost on the limit the last 20 or so minutes.  Over the top, the course turns right onto a huge road that rolls downhill.

After the climb the packs were splintered and all of them were going backwards except one about 500m down the road which was booking it with a certain Dan Craven and others driving it.  I realized that was probably the “last chance pack” at a front row seat of the race and I went full “eat my stem” mode to bridge up.  Unfortunately, they were doing the same thing and every pack I passed was going backwards faster than I was going forwards.  But I could tell I was making up ground on them and after several minutes I bridged up to them as they bridged up to another larger pack.  Also known as the lead pack.  I made it to the front after 30 minutes of hard chasing.

There was a small break up the road, and the pack was rolling at a good speed so I played tail gunner and tried to eat and drink since I had another 4 hours of racing to go.  The next major thing would be Bear Mountain at about 45 miles.  This is a 17’ish minute climb at 5% and that would be the start of the race for real, except for me who already raced the first 15 miles.  Following the climb it would get very lumpy and a break would go and/or the field would shatter so I did my best to gather for the storm.  But I also knew that even if I got blown out on the climb, the fact that I was the last man to make the group was satisfying.  I also knew it would earn me some serious DBH points.

Unlike my usual strategy of being in the wrong place in the pack before a climb I hit the Bear Mountain climb a few wheels back and was able to follow wheels, go with attacks and keep myself on the front.  The only discouraging thing was every time I looked at my power meter my perceived exertion and watts were off by 50.  We caught most of the breakaway up the climb and two punchy climber guys kept ripping my legs off but I was able to steadily ride them back till 500M to go and I finally gave them enough of a leash I could pull them back on the descent.  We went over the top with a top 10 Strava segment for the climb.

I regrouped with the lead 2 riders and the last guy from the breakaway was coming back quickly.  Behind more riders were getting back on.  By the time the group was 20-30 big I started to panic this was going to fully regroup and I would get stuck trying to cover things and guess rider strength.  So instead I decided to race like an idiot and attack repeatedly.

I attacked and some people bridged, behind people started covering.  We regrouped and I went again.  And again.  And again.  On some steep climb with some tight turns away from the river I finally got a solo gap and going over the top Richardo Pichetta an Italian and former winner bridged up and punched it.  There were a few others in chase and I got the sense he was not a guy anyone wanted to see up the road.  Eventually the group started coming back together but now it was more like 10-15.  So I attacked again, and again, and again each time getting covered or forcing the group to string out behind me and further shrinking it.  After another KOM, Cheese Hill or something, and some hard and steady riding there was a lull and I went again but harder and more committed.  I had a good gap and 4 guys bridged up.

In the group was Richardo, Michael Margarite a former winner, Luis Lemus the Israeli Pro Cycling guy (Olympian and multi-time Mexican national champion), and another guy that looked like he was going to die, also known as Jurgen Moreels.  Lemus went to the front and annihilated us.  Now I looked like Jurgen plus 50 pounds.  Our group moved clear of who was left and we settled into a solid pace line.  I looked back repeatedly but never saw anyone.  The next group would end up being 5 minutes back at the finish.

Being in the front group we had a lead car with a race clock and multiple motos with cameras covering the race.  The slogan for the race is “Be a pro for a day” and I have to say they delivered on that promise.  As a 36 year old, 14 years past his prime bike shape, who lives in a small town, racing through New York City with an escort is something special.  Click Like.  Would do again.

As the clock ticked past 3:50 we got to the second to last climb.  I had felt super bad at the start of our break, but started to feel better.  But going up the climb I could tell I was running out of steam.  The number of training rides I have had this year over 3:50 was 3.  Oh, and I haven’t slept more than 3-5 hours at a time since May 3rd.

Lemus attacked hard and Margarite and Richardo went with him.  I, to take a quote from Tom Dumoulin about Simon Yates “Didn’t think about going with him for a second”.  And as fast as that, they were gone up the road with the fancy escort and Jurgen and I were left to chase, still looking like we both wanted to die.

Cresting the hill there was 8 miles of racing left and we worked together to limit our losses but in the end finished a little under 2 minutes down on Margarite, GFNY’s first male double winner.  I finished in 4th after Jurgen asked me how old I was and he found out I was not in his age group.  That was the only moment in the race I felt like I was in a Fondo in the Americanized sense of the word.

Last hill before finish with Jurgen

Crossing the line in 4th

With the “road racing is dead” sentiment so many people have this race, yes race, defies that proclamation.  Although the race has a participant component the front end is racing hard and it is good racing.  Although I still love traditional road racing I don’t see any reason not to have events like this part of mainstream cycling, honestly, it is mainstream cycling.

Oh and power meter.  The seal busted and filled with water.  So after registering low then ridiculously high it crapped out.  So no data, but I think it still counts right?